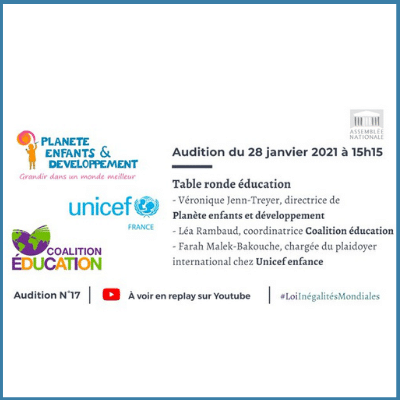 Planète Enfants & Développement was invited by the Foreign Affairs Commission of the National Assembly, on Thursday January 28th, along with Unicef and Coalition Education, to share its experience and observations on the bill on solidarity development and the fight against global inequalities.

To prepare his report on the revision of the 2014 law on development policy and international solidarity, Deputy Hervé Berville initiated a series of hearings with civil society and NGOs. He thus invited 3 organizations on Thursday, January 28, 2021. He wished to collect the observations of Planète Enfants & Développement in particular, on the Education section of the bill, for which he is the rapporteur at the National Assembly.

Planète Enfants & Développement was thus able to recall the importance of early childhood development to fight against poverty and inequalities. For PE&D, education begins at an early age, in the family as well as in the nursery and at school.

Our recommendations were as follows:
- Integrate the preschool for 3-6 year olds in basic education
- Support the implementation of childcare facilities for the youngestby encouraging theentrepreneurship
- Strengthen the training for early childhood professionalsa growth sector for theyouth employment

As a member of the Groupe Enfance, a collective of 19 NGOs defending children's rights at the international level, Planète Enfants & Développement also pointed out the absence of Children's Rights in this text. Due to the vulnerability of children and their particular need for protection, the Groupe Enfance recommends that their rights be taken into account in the bill, as well as the mention of the International Convention on the Rights of the Child as a reference framework.

The programming bill on inclusive development and the fight against global inequalities is to replace the law of July 7, 2014. It revises France's objectives, resources and intervention methods for international development. It thus frames France's official development assistance budget until 2022, with a view to reaching the goal of 0.55 % of gross national income set by the President of the Republic (still below the commitment of 0.7 % made at the G7 in 2005).

> Learn more about the bill : https://www.assemblee-nationale.fr/dyn/15/textes/l15b3699_projet-loi

Official Development Assistance (ODA) is provided by governments to improve economic development and living standards in developing countries. It does not include loans and credits for military purposes. Aid can be provided bilaterally (directly from a donor to a recipient) or through a multilateral organization (UN, World Bank). It takes the form of grants, concessional loans or technical assistance. Source https://data.oecd.org/fr/oda/apd-nette.htm