STOP inequalities between children in the world, more means for early childhood! 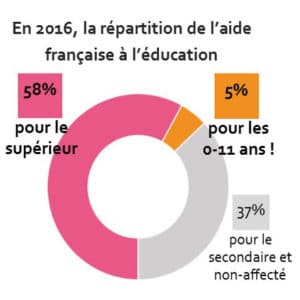 Traditionally, it is often the community and the family that organize the care of the little ones.

But in recent years, the rapid industrialization of urban centers and the decline in agricultural production have led to a major rural exodus, which has disrupted this organization. Many mothers now work in the city and have no choice but to leave their children alone during the day or in the village. Sometimes, mothers prefer to quit their jobs to take care of their children, which makes the most vulnerable families even more precarious (lower income, older children forced to work, etc.).

"It is during the first years that the child lays the foundations of his development. They develop their motor skills, their language and their self-confidence.
Without these basics, how can one succeed in elementary school, how can one integrate socially, how can one move towards autonomy?"

France is very much invested in children and youth in the world: education is one of the largest budgets of our official development assistance. But only 5% of this budget is devoted to the 0-11 years old, with a tiny part for the 0-6 years old.

With an online petition, we want to alert the government to this imbalance and the insufficient means given to early childhood. We now wish to mobilize other actors of the early childhood sector to influence the vote of the official development assistance budget, which will take place at the end of the year.