Men involved in the fight against violence against women

In Cambodia, where women are still regularly subjected to domestic violence, Planète Enfants & Développement leads a project to prevent and fight against this scourge. One of the methods used is to make men and women think and communicate. Find out more about this participative method. 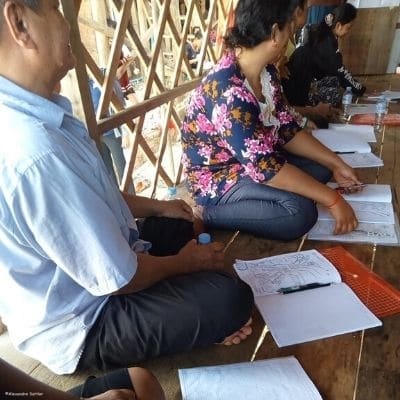 Involving men against violence against women

In Cambodia, 20% of women aged 15-49 have experienced physical, verbal, or psychological violence, most often within their families.

Women from poor communities are the most vulnerable. Domestic violence inevitably has an impact on children. Many women receive their first blows during their pregnancy.

Since June 2018, our team on site has therefore been conducting a project to combat violence against women.

Violence against women is often the result of too much anger and a lack of communication within the couple. This is why our fieldworkers use the Gender Action Learning System (GALS), developed by Oxfam in 2007. It places the participants at the heart of the project and makes them think about the place of each one within the couple, the constraints and the opportunities encountered.

One of the keys to the project is the male participation. They have a central role to play in changing mentalities and promoting gender equality. The inclusion of men in the project also promotes mutual respect within the family.

The trainers encourage the use of non-violent communication and explanatory diagrams allow everyone to visualize the path to follow to restore trust within the couple and family harmony.

The use of drawings allows for the inclusion of people who cannot read or write. Everyone is free to express their fears and the sharing of tasks within the couple is discussed.

Participants also receive financial education classes to learn how to better plan their spending over the long term.

The results are very encouraging. Here is a testimonial from a social worker who saw a man's behaviour change thanks to the project:

"After receiving his salary, he would often call some friends over for a drink. He didn't care about his wife and kids. But now he realizes that he is less violent at home and has cut back on alcohol-related expenses. He even plans to save money to build new projects with his wife and children and to look forward to the future as a family.".