Earthquakes on 25 April and 12 May 2015 affected 8 million people in Nepal, in the Kathmandu Valley and in several other districts.

Nuwakot district, which has 277,471 inhabitants within an area of 121 km2, is one of the 14 districts that was the most affected by the disaster. According to estimates based on Government data, 51% of the population of this district, or about 140,000 people, have been affected. 1,000 people are dead, 1,311 injured and 51 schools have been partially or totally destroyed.

The unstable situation of the inhabitants of this area has made them more vulnerable to social and health risks and to trafficking.

Between June 2015 and July 2016, Planète Enfants & Développement had set up a programme to protect and accommodate children in secure areas. 11 villages were defined as a priority: 8 in Nuwakot district and 3 in Makwanpur district. First of all, we brought psychological assistance to residents. Then, we brought protection to children through temporary areas of reception and temporary schools. And finally, we financially supported the families, helping them recover their means of production.

In 2017, Planète Enfants & Développement is focusing its activities on two communities to continue its actions in the following areas: prevention activities against trafficking, for its gender equality, social and economic inclusion of vulnerable populations and the protection of childhood. 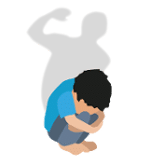