FIGHT AGAINST GENDER-BASED VIOLENCE IN CAMBODIA

Many women receive the first blows during their pregnancy. There is an urgent need to protect these women and their children. 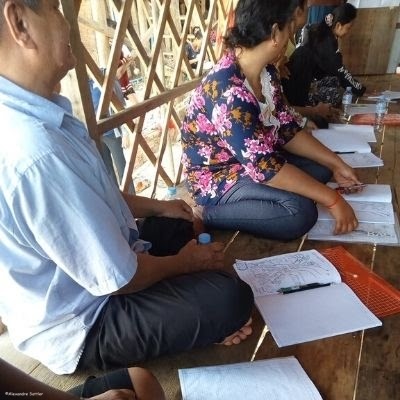 Faced with this observation, we have set up a project dedicated to the fight against violence against women.

Psycho-social support is offered to women victims of domestic violence to strengthen their self-confidence and their ability to act. In 2019, 65 women were accompanied by social workers with our partner SKO.

At the same time, awareness-raising actions are being implemented. Sessions aim to develop a more egalitarian conception of masculinity.

The involvement of men is a priority to initiate a long-term change in mentalities but remains a challenge.

To achieve this, we have adapted the “Gender Action Learning System” method developed by Oxfam in 2007. It is a participatory training based on drawing, which allows us to include the most vulnerable populations, most of whom have low literacy skills. The training sessions concern gender equality and non-violent communication but also financial management in the household. Financial education is a good entry point for discussing sensitive topics such as alcoholism, violence or joint decision-making by women and men in the household.

After completing the training, two savings and credit groups were launched in two different neighbourhoods by women exposed to domestic violence. Over time, the groups grew in popularity and more women joined them. They enable participants to start small businesses and regain self-confidence.

A survivor of domestic violence, Ms. Sopheap worked on her situation with our team of social workers for several months. In October 2019, she joined the financial management training.

“Before the training, I didn’t know how to manage a budget and I didn’t have concrete goals to improve my family’s situation. In fact, I realized that I was spending a lot of money without realizing it. For example, I was spending $2.5 to $4 a day on food. That’s a lot for our standard of living. Now that I have a better understanding of how to manage the family budget and how to identify priority expenses, we now only consume an average of $1.75 a day on food and we still have enough money saved to pay the rent and send our daughter to school.

Now I am proud of my abilities. I have gained my husband’s trust and the relationships within my family are improving. My neighbours are curious about my method and even ask me for advice. Soon, I would like to start a mobile fruit and vegetable business on a motorcycle“.