Burkina Faso is experiencing strong population growth (+3.05% per year) and rapid urbanization. It is estimated that by 2050, the population of the capital Ouagadougou will be 6 to 12 times larger.

24% of the families living there are without income and 65% of women are victims of domestic violence. Children are often unaccompanied.

Today, the State is struggling to cope with this population growth, which strongly affects the quality of life of the most deprived. Often, the most disadvantaged families are not aware of the services to which they are entitled.

The Centre West and the Boucle du Mouhoun are particularly vulnerable regions where poverty rates are 51.7% and 59.7% respectively, compared to 9.3% at the national level (National Institute of Statistics and Demography, 2014).

The inaccessibility of many civil registry services and the lack of trained staff explain why, in both regions, less than 60% of births are registered within the legal two-month time limit (Directorate General for the Modernization of Civil Status, 2017).

Finally, the weakness of mechanisms for caring for victims of gender-based violence in these regions and the dramatic persistence of cases of child marriage, forced marriage, excision, domestic violence and physical violence against girls and women must be highlighted. 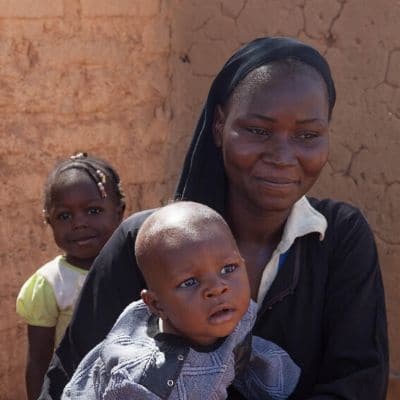 Our objective is to support marginalized families in Ouagadougou underprivileged neighbourhoods (without access to water, sanitation and electricity services), and in the Boucle du Mouhoun and Centre-West regions. To improve their living conditions and well-being, we facilitate their access to basic social services and improve the quality of civil registry services.

Association for Community Promotion and Marketing

Association of Municipalities of Burkina Faso

Ministry of Social Action and Solidarity

History of the C. family: “Since my family has benefited from the support of Planète Enfants & Développement and AGIR, things have started to change. My husband and I can now sit down together and discuss about certain subjects. I also learned how to educate a child, to follow him, not to shout at him… All this has improved our life and my family is flourishing. I thank the project and the whole team of facilitators very much“.