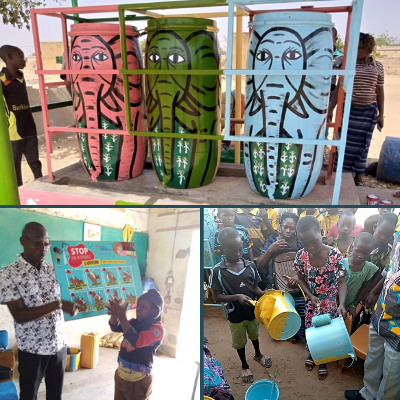 What is the outcome of the “Mémoire d’Éléphant” project in Burkina Faso?

What is the outcome of the “Mémoire d’Éléphant” project in Burkina Faso?

After the Gourma province, our elephants went to 25 schools in the Gnagna and Komondjari provinces in Burkina Faso in 2020. Five months after the installation of playful hand-washing devices in schools, it is time to take stock of this project called Luomo. The results are clear: all the beneficiary schools have seen an increase and improvement in handwashing practices.

Accessible, easy and fun, the devices have been a great success with both pupils and teachers, as Mr Compaoré Lassané, headmaster of the Pantaloana school, testifies:

“The adventure was beautiful… We spent together in beauty a term rich in hygiene, in colours, harmonious collaboration through this project… Congratulations to PE&D and to all the winning schools… In short, it is everyone who comes out a winner through LUOMO.

To analyse the impact of this scheme, we worked with teachers to have them record their observations on handwashing practices on a daily observation sheet. Secondly, we asked the schools to regularly record the quantities of water and soap used by the pupils. The teachers were able to collect all the data that led us to this conclusion via a digital application we installed:

That is 27 points more before/after meals and 20 points more after using the toilet. To achieve this success, we had to involve all members of the school in the scheme and work with the pupils to make them aware of the importance of washing their hands. While a traditional method would probably not have had much impact on the children’s behaviour, we chose to use games to embed this routine in their lives.

After installing the devices, which were adapted to the size of the school (mobile or fixed), we provided all the materials needed for them to work properly, such as soap and the elements that would be used to decorate the tools. To involve the children more, we let them personalise each device. The aim was to make each barrel look like an elephant pouring water. Before leaving, we distributed manuals reproducing the device and posters raising awareness about handwashing. At the end of the project, four schools stood out for their creativity and we rewarded them with new hygiene and sanitation materials.

In total, this project involved more than 10,360 children from 25 schools in the eastern region of Burkina Faso. We hope to reach even more schoolchildren to make handwashing a permanent habit. Diseases transmitted by hand contact remain a major cause of human morbidity and mortality. Each year, approximately 1.3 million people die from diarrhoeal diseases.