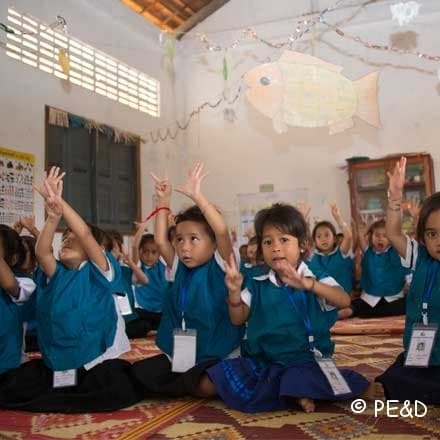 A new giant step for quality kindergarten schools in Cambodia

Planète Enfants & Développement and its Cambodian partner Bandos Komar have just been selected by the European Union who will finance the support of a hundred community kindergarten schools in four provinces of the country. 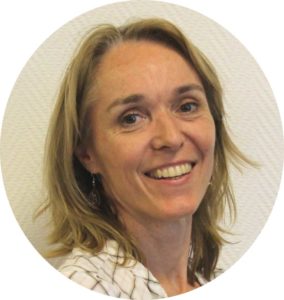 Véronique Jenn-Treyer, co-director of the association, reviews this victory and the history of our association with Early Childhood in Cambodia.

There is talk of supporting 100 community kindergarten schools in Cambodia. Concretely, what does that mean?
In 2008, Cambodia adopted a decentralization law that distributes the responsibility to local authorities to manage early childhood services. However, during an evaluation conducted with UNICEF in 2015, we noticed the shortcomings in the management and follow-ups of kindergartens by the districts and provinces, putting their stability in danger. Today, our project aims to offer the means to school management committees and local authorities to fully assure their role and responsibility. To this end, we will train them in the Cambodian legislative framework, notably on the standards that community schools must meet. We will create and support, on a daily basis, the management committees of each municipality concerned. This will involve strengthening their capacities in several domains: organizing their budget, formalizing the request for support and subsidies from the Ministry of Education for additional training for female teachers, equipping them with educational materials, and carrying out necessary building renovations. Following a decree in December 2017, community schools that have reached a certain level may be certified and directly supported by the Ministry, which makes it possible to ensure a salary three times higher for the teachers.

Who will benefit from the project?
Starting from 2020 and for three years, we will support twenty community councils in four provinces: Kampot, Kampong Speu, Sihanoukville, and Pursat; covering 100 kindergartens. In fact, 100 female teachers can teach in better conditions, 2000 children ages three to six can benefit from quality schooling, 4000 parents convinced of the significance of education starting from the youngest age, and collective awareness of issues at stake starting from three years old.

The history of the association with Early Childhood in Cambodia is nothing new. Can you trace us back to it?
Indeed, our experience around the community schools in Cambodia dates back several decades. At our arrival in the country in 1984, kindergartens hardly existed. 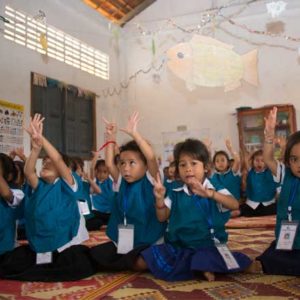 First, in the countryside, we identified and trained teachers and set up an economic model with income-generating activities to finance the schools. Simultaneously, we inspired and supported the Ministry of Education to open up kindergarten classes in primary schools. Then, we were the first ones in the 1990s, with UNICEF, to develop a model of alternative school in public schools at a low cost and managed at the community level, which allowed the increase of supply that was then very insufficient. First in the villages, then in urban settings in the 2000s. We also created 150 community kindergartens in the country. The model quickly proved itself and the Cambodian State officially adopted it in 2002, in addition to that of the public school, which progresses very slowly. Since then, the World Bank, UNICEF, and numerous NGOs have appropriated it to support community councils for the creation of more than 3000 kindergartens.

Experimenting with the models at small scales, ensuring that the locals adopt and multiply them, is in our DNA. We are, therefore, very proud of this new progress today.